As We Go Marching Through Georgia

Let's talk about our history, because history matters.

Like many Americans, my personal history is deeply entwined in the history of the nation. Lately, for reasons that may be obvious, I feel broken and betrayed.

Some people have said we're erasing history if we take down the statues of our civil war heroes. Some say America's political divisions now are so profound that it's time to set it all aside and simply forgive the transgressions of those American citizens who, in a supposed exercise of free speech, took the further liberty of violently attacking the U.S. Capitol – and the people in it – on Jan. 6, 2021.

Can we face our future and turn our backs on the past? Maybe we could if time was a straight line, but the reality seems a lot less certain.

I was born in West Virginia, a state that was itself born of civil war. One of my great-great-grandfathers, James Brady, emigrated from Ireland in the 1850s at the tender age of 14 to escape a terrible famine. Abandoned by his aunt in Philadelphia, he found work at a hardware store there. By the time he was a full-fledged adult, he was building his own hardware store in Handley, West Virginia to supply the local coal mines just after the war.

A great-great-great grandfather from another branch of what would become my family tree, Spencer Hill, had settled decades earlier in a place called Belva after serving in the American Revolution. He's buried there now under a bronze plaque commemorating his service to a new nation. James Brady would marry one of his granddaughters.

Even earlier, in 1790 (and with this grandfather, I've lost track just now of how great he was), Jean Baptiste Bertrand had been lured with about 500 of his countrymen by a real estate scam in which the Ohio River Company sold land that was rightly occupied by the Shawnee people in a place later called Gallipolis, Ohio. (Gallipolis means "City of the Gauls," another name for the French.) Like James Brady almost a century later, Bertrand was a merchant, and may have been instrumental in negotiating peace between these hapless French settlers and the Shawnee. His wife, one of my many grandmothers, was a Shawnee woman who took the name Americay.

Not entirely incidental to all this personal history was a man named Tecumseh, one of the great Shawnee chiefs. Tecumseh was a warrior and spiritual leader, what some white people called a "medicine man," though few white people ever really understood what that meant. Tecumseh moved around that part of Ohio quite a bit, as did all his people, and in his travels he urged all the tribes to unite. Because a federal law called the Northwest Ordinance had decreed that Ohio was to be "settled," some white people wanted all the land, wanted to drive out all the indigenous people, and that caused our armies to drive out Tecumseh, the Shawnee and all other tribes, west and north across the Great Lakes into Canada.

They did not go quietly.

Tired of history yet? Hold on. Stuff just keeps happening, and it all connects to you and me today.

To many Europeans who emigrated to America back then, even other Europeans were barely considered human. Through uneasy alliances, most of the crowned heads of Europe had managed to avoid the disastrous effects of inbreeding by marrying royals from other European capitals. But the English and the French hated each other, nobody really understood the Prussians, the Spanish and the Brits were often at odds over control of the seas, and the Italians were suspected everywhere because people thought the Pope wanted to take over the world (in fact, most of the Popes back then did want to take over the world). The Irish didn't have a great time of it, either.

And we think the United States are a disunited mess now.

So these white people frequently mistrusted one another, trusted darker skinned people even less, and in their unbridled lust for property they couldn't produce enough white babies to do all the work around the farm. That's essentially why the big plantations enslaved people (including other white folks, who were called "indentured servants" to make slavery sound friendlier).

Now this abridged but rather rambling history, mind you, is coming from a white guy approaching 65 years old in the second decade of the 21st century. I may not have every detail nailed down, but most of this is accurate and objective enough for the purpose.

And now we come to that purpose, which is to question why anyone would want to tear down statues of the great heroes of the Confederacy. And why, on the flip side of that coin, anyone today would carry a rebel battle flag replica into the halls of Congress.

Remember Tecumseh, the so-called "medicine man" of the Shawnee? Hugely respected man, revered by the white settlers too. This was a man whose name meant something, especially in Ohio and in the part of Virginia that would become West Virginia.

In 1820, only a few years after the Shawnee were pushed north forever by Commodore Perry, a white boy was born in the southern Ohio frontier town of Lancaster. His father, who would later become an Ohio Supreme Court justice, named him Tecumseh. This boy was called Tecumseh until sometime after his father died in 1829, leaving Tecumseh "Cump" Sherman and his siblings to a mother who was unprovided for, sadly incapable of caring for her children. Tecumseh Sherman was sent to live with family friends who were well off, and in that home he was given the name William, and eventually was accepted at West Point Military Academy.

It was this William Tecumseh Sherman who later marched 60,000 Union troops through the southern states, killing and burning and pillaging without mercy. 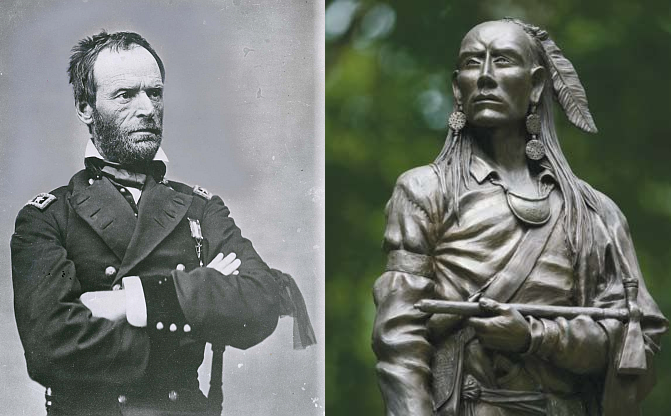 More than a century after his murderous and destructive rampage, my fifth-grade teacher in Barboursville, West Virginia recalled an innocent childhood memory of skipping through the house humming the song "As We Go Marching Through Georgia," a march composed at the end of the civil war to commemorate General Sherman's brutal monthlong campaign to capture the city of Savannah.

Her blind grandfather, a very old Confederate veteran who had come home to die with his family in Greenbrier County, West Virginia, "caught me up short," she said.

"Don't you ever sing that song, girl," he cautioned her in the sternest of voices. "Not that song."

Young Betsy was stunned. It would be many years before she fully understood her grandfather's rage.

Mrs. Elizabeth Patton made history come alive for me that day in fifth grade. I hope you had a teacher or two like that.

"War is hell," Sherman would tell future soldiers, years after proving it to everyone beyond all doubt. We remember him for those words, but we don't claim hell as our heritage. Maybe we should.

This nation long ago embraced war as a means to our ends. We kill people in wars. Sometimes we burn their homes, their businesses, their churches, their towns. Even centuries later, the human toll of war is stunning. Civil war is an even more unthinkable horror. To make some sense of it, perhaps, we honored those who died in Our Civil War by erecting statues of gallant men who led America's sons and brothers and fathers to their deaths by sending them to fight other American sons, brothers and fathers.

In bronze and granite and alabaster likenesses that endure far longer than human memory, we've immortalized men who maimed and killed some of the most promising young men of that generation, some of their names still remembered in many of our own families.

It's a collective insanity beyond measure, and yet by any measure, William Tecumseh Sherman was an American general who led his soldiers to accomplish extraordinary things.

Sherman's reputation wasn't redeemed by decades of sanitizing his public image. People didn't contribute money to erect statues of him in the lowland cities and towns he destroyed on his march to the sea. There is such a statue at President's Park in the nation's capital, another in New York's Central Park. He served honorably and well as the first superintendent of the Louisiana State Seminary of Learning and Military Academy (now Louisiana State University), but you won't find one statue of this man in the vast lands we call The South.

Search for statues, memorials, books and postage stamps celebrating Robert E. Lee or Thomas "Stonewall" Jackson, though, and these can be measured by the acre or the ton, because what came to be called Reconstruction after the civil war was a one-way street paved with forgiveness born of denial.

In a very short time, Reconstruction spawned Jim Crow laws and poll taxes for freed slaves, and much worse. Much, much worse. White folks cheated and murdered and made excuses to imprison Native Americans, emancipated slaves and free Black citizens, and not just in The South. Margaret Mitchell eulogized the lost cause of the Confederacy in her epically bloated and saccharine novel, "Gone With The Wind." Hollywood obliged by launching that sanitized history to the big screen with the biggest stars of the era. The United Daughters of the Confederacy perpetually raised money to build more memorials to their long-dead generals, who were pronounced "southern gentlemen" with a vaguely aristocratic sneer.

Many memorials. Many statues. Many books. Many years of denial and whitewashed history. All part of our glorious and shamelessly made-up heritage.

While the damned Yankees held their conciliatory tongues, not salting The South's wounds with statues of the merciless Sherman, Southern apologists sought a perverse restoration of their dignity by honoring the leaders of a fatally flawed rebellion. This occasional upwelling of Southern Fervor tumbled on for more than 150 years, once inspiring kids like me to wear souvenir rebel caps and wave the rebel battle flag, which until very recently was still incorporated into the state flag of Alabama.

For generations, our citizens of color have looked on in horror and often suffered in silence as their civil rights were dismissed or trampled, as we literally elevated the traitors who led the rebellion against their full participation. Many of us with less melanin in our skin, myself included, waved and cheered a flag that signaled their subjugation, our "heritage."

It's a sickening heritage, and a false one.

Now a bright, sanitized cotton/polyester replica of the tattered old rebel battle flag has been unfurled during an armed insurrection at the U.S. Capitol in Washington, D.C., where actual Confederate troops never set foot, proving finally that our post-war "reconciliation" was a shameful surrender of our founding principles, a mockery of justice and an ongoing validation of treasonous rebellion.

Our grandfathers and grandmothers left us with stories and truths to guide us. We owe it to them, and to the future, to make this right for the sake of a nation that promises liberty and justice for all. Whatever claims to greatness we may have had, we have fallen far short of what we can be. Our grandmothers would be ashamed of us.

We can't live together this way. If we reconcile too readily with rebels and tyrants, if they don't earn our collective forgiveness by paying an appropriate price, we forever deny them the dignity that comes from earnestly admitting their mistakes and restoring their rightful place in our society. We deny ourselves real justice.

This is our heritage and our responsibility, and the republic may not survive another 150 years if we ignore the lesson: There's no forgiveness for sedition without contrition. There's no redemption for any of us without accountability.

Yes, I really do believe we should sing songs of unity and reconciliation after all this is resolved, and after all those involved have paid for their betrayal.

But not that song. I don't ever want to hear that song again.

I write about our connections